Prior to the airing of “Heroes Rise: These Delicate and Dark Obsessions”, Ben McKenzie, who directed the episode, talked with 21th Century Fox Blog about his experience behind the camera. When asked about a scene he’s particularly proud of, Ben mentions David Mazouz (spoiler alert!):

I’m also proud of the work of David Mazouz [who plays Bruce Wayne] with Raymond J. Barry, who plays The Shaman character who’s mentoring Bruce. I think both David and Ray did excellent work, and their storyline in the episode culminates with Ray giving a call to action to Bruce saying that the city needs a protector and needs to be defended, and you see the beginnings of that glint in Bruce’s eye showing he will become the Batman. With a slow camera push-in and the beautiful score swelling behind it, it’s quite a moving little piece and I’m proud of it. Robert Hull, who wrote the episode and whom I should give a lot of credit to, delivered on some great dialogue. As a fan of the Batman canon, it was a real treat for me to direct an iconic scene like that.

“Heroes Rise: These Delicate and Dark Obsessions” airs tomorrow, May 1, at 8/7c, on FOX.

John Stephens, executive producer of “Gotham”, talked to Lucas Siegel of ComicBook.com about Bruce’s evolution towards Batman in season 2:

In the last few episodes before the Season 2 mid-season break of “Gotham”, Bruce Wayne really started to change. That is to say, Bruce started manipulating people, lying, scheming, and generally speaking being a darker and angrier individual. And don’t forget, he’s still only in his early teens.

“I think with all of these things, it’s a coming of age story. None of these things are going to be smooth or direct trajectories,” executive producer John Stephens said of Bruce’s journey to Batman in an interview with ComicBook.com. “It’s going to be a step forward, a step back, peaks and valleys. I think you’ll see Bruce make big steps towards becoming that person who’s going to be Batman this season, and then have failures and setbacks that sort of reorganize his life and readjust his priorities.”

That means that Bruce’s journey to becoming Batman – or even someone who wants to become Batman, may seem like it’s going very fast at times, then slow or even reverse course.

“I think we can keep pushing the boundary back, then having him knocked down and learning lessons,” Stephens said. “I think if you look at Bruce Wayne now in season 2, and look at the way David [Mazouz] plays him, you can look at him and see how this person could become Batman. You see that strength, and the desire to take chances and change.”

He said ultimately, Bruce “doesn’t want to just be this hurt kid,” and what he does is all in the name of seeking control.

Executive producer and show creator Bruno Heller talked to TVLine about the fall finale of “Gotham” and what is to come in the second half of the season. Here’s what he had to say about Bruce’s quest to find his parents’ killer, and about the young members of the cast:

TVLINE | Now that Bruce is no longer being sought for sacrificial slaughter, and his father’s hard drive is fixed, will he delve back into the Wayne Enterprises mystery?
Yes, he does. In the back end of the season, there’s going to be no vamping, no promised revelations that do not occur. We’re going to get to Indian Hill. Horrendous, huge, spectacular, dramatic things are going to happen. Bruce is going to get to the very heart of the mystery of who killed his parents, and there are amazing scenes coming up. One of the beautiful things that we’ve been watching over the last couple of seasons is David Mazouz growing up with such gravitas and dignity, but with all of his open, honest acting skills intact. You saw the stuff he was doing with Silver in [the fall finale], he has some weight on him. As a young actor, every day he surprises me how great he is.

TVLINE | Your whole young cast there is very solid. David, Natalie [Alyn Lind], Camren [Bicondova]… I was very impressed with what they did in these past few episodes.
Because they work together, it really helps all of them. It only takes one of those “cheesy teenage individuals” in an ensemble to bring everyone down to that level, but they’re all so great it brings everyone up.

Chris Chalk (Lucius Fox) was interviewed by Collider prior to the fall finale of “Gotham”. Click here to read the full interview, or check below an extract where the actor talks about Lucius’ relationship with Bruce, and working with David Mazouz:

For those who aren’t familiar with the history between Bruce Wayne and Lucius Fox, what is that relationship?
CHALK: You’ll see those seeds being planted this season. We planted the one big crop, and now it is setting its roots. That’s a weird analogy, but it makes sense in my brain.

What’s it like to do scenes with David Mazouz?
CHALK: It’s great! He’s such a pro. He’s always so on top of it. He remains youthful, charming and joyful, and he gets the job done. No one is ever waiting for anybody, really. On some sets, when there are younger people, there are lines forgotten or there are distractions with school. But he’s always prepared, and yet still having fun. It’s not surprising, but it’s really gratifying.

Chris Chalk, who plays Lucius Fox in “Gotham”, talked to TVLine about his character, and his relationship with Alfred and Bruce.

Question: I loved the first significant scenes of Chris Chalk’s Lucius Fox on “Gotham”. How much can we expect to see of this awesomeness during the season? Any spoilers you can share? —Nicole
Ausiello: As established in next week’s episode (though he’s off camera), Lucius is getting ever closer to fixing Thomas Wayne’s secret computer, so it’s just a matter of time until he resurfaces to keep Alfred on his toes and help mentor young Bruce. “What Sean [Pertwee] and I find exciting about the Lucius/Alfred dynamic,” says Chalk, “is it’s two people who can match each other. Usually Alfred is the smartest man in the room, the most dangerous man in the room, and now he has an intellectual counterpart who’s like, ‘I can go all day with you.'” The Wayne Enterprises tech-spert’s connection to Bruce, meanwhile, “is pure loyalty,” says Chalk. “His dad was for the greater good, and having not previously pledged his loyalty in a more active way, Lucius now has a chance to do that with Bruce, to be an adviser in a way.”

On Tuesday, Sean Pertwee (Alfred Pennyworth) attended an AOL Build event where he was interviewed about “Gotham” and answered some fan questions. He once again talked about his experience working with David Mazouz, who he jokingly calls “irritatingly brilliant”.

Click the picture below to watch the video of his interview, which begins with a new clip from “The Last Laugh”, this Monday’s episode of “Gotham”, where Selina Kyle makes an appearance! You can hear Sean talks about David at about 8 minutes. 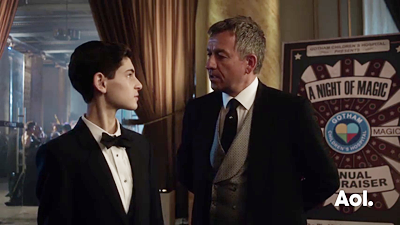