David Mazouz received his Ride of Fame Imminent Seat in New York City, last week (October 4). Pictures have been added to the gallery:

David was also interviewed and shared some spoilers about what’s to come in “Gotham” for Bruce. Click “Read more” to watch/listen to/read what he had to say.

END_OF_DOCUMENT_TOKEN_TO_BE_REPLACED

In the same article, “Gotham” executive producer John Stephens commented on how Selina’s new allies this season will influence her:

Then there’s Selina, who has teamed up with Tabitha and Barbara to form what Stephens calls a “little family.” According to Stephens, “They both function as almost a mother for mentor figure for Selina, both teaching her different elements that will become part of the Catwoman psyche.”

TV Insider shared a new sneak peek at tonight’s season premiere of “Gotham”, where Bruce pays Jim Gordon a little visit at the GCPD. You can watch the scene below:

There’s more! David Mazouz also talked about Bruce’s motivations for becoming a vigilante in season 4, and how it’ll impact his life:

“I feel like Bruce really has evolved in a major way. We pick three months after Season 3 ended and within that time, Bruce has been vigilante-ing out on the streets. And, of course, that’s going to change a person. That’s going to make them more tough, more raw, and that’s exactly what Bruce is now.

A big, big reason why he’s doing this vigilante thing is because it’s fun. Bruce is doing it because he’s having the time of his life. As a teenager, he wants to just have fun, do what he wants to do, like most teenagers; I can very much relate to that myself. And that, obviously, is not why Batman does it.”

Hinting that “a very traumatic experience” will lead Bruce to make a decision “that will change his life — his entire life — forever,” the 16-year-old actor reveals that his fledgling crimefighter’s nocturnal activities will divide the key players in town, including two of his previous allies. “Bruce’s mission gets in the way of his relationship with Selina (Camren Bicondova) and he has to choose between the two. And not just Selina, it also happens with his relationship with Gordon (Ben McKenzie).”

A new character is coming to “Gotham” in the remaining episodes of this season, and it doesn’t sound good for Bruce:

Raymond J. Barry has been cast in a recurring role opposite David Mazouz on Fox’s Batman origin series “Gotham”. Barry will play the temple Shaman, a mysterious figure who enters Bruce’s (Mazouz) life with the stated intention of unlocking the potential of his own mind. While the Shaman says the fate of Gotham depends upon Bruce becoming the man the city needs him to become, the truth behind his intentions proves to be far more sinister. From writer/executive producer Bruno Heller, “Gotham” follows one cop’s rise through a dangerously corrupt city teetering between good and evil, and chronicles the birth of one of the most popular super heroes of our time. Barry’s credits include “Training Day”, recurring roles on “Ray Donovan” and “Ice”, and “The Purge 3”. He is repped by Metropolitan Talent Agency and manager Bob McGowan. 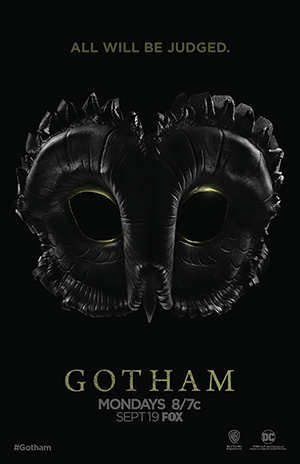 “Gotham” executive producer John Stephens talked to CBR News prior to the season 2 finale, and here’s what he had to say about Bruce’s evolution in seasons 2 and 3:

Hugo Strange refers to his employers as “masters.” Who are the Court of Owls, and how much are we going to learn about them in the finale?
The Court of Owls is like an Illuminati. They are a shadowy group of powerful people who have controlled Gotham for centuries. They might, or might not, be behind the Wayne murders. They have financed and directed Indian Hill and Hugo Strange’s research. We will not learn all that much about them in the finale, save for the fact they are the people behind Hugo Strange and are most likely the culprits behind Martha and Thomas Wayne’s murders. Bruce will learn of their existence, but not necessarily their name. That will obviously push him forward.

Bruce and Lucius are currently being tortured by Nygma – what does that mean for these three characters?
What we gain from that is all three are intellectual, especially Lucius and Nygma. Also, we as an audience have a great deal of affection for Nygma. In having watched his development from quirky forensic guy past two seasons, I hope when you are watching it, even though you are pulling for Bruce, that your sympathies are a bit divided because there’s a great deal of affection for Nygma.

Speaking of character growth, Bruce Wayne isn’t the same teen audiences met in Season 1. How far along the path is he to becoming Batman?
He has a long way to go. Our thinking is that, in every season, we’re going to start trying to add another piece of the Batman jigsaw puzzle. For instance, in Season 3, we’ll be adding another huge piece of the puzzle that will go into being Batman. He still has a long way to go – physically, emotionally and intellectually – in all those different facets.

When you saw episode 10 this year, where he and Selina ran a con on Silver St. Cloud and he appeared to be one thing over another – you saw him really step forward and be a different person than he had been before. To me, that was a big step forward to him becoming Batman.