Bruno Heller, “Gotham”‘s developer, talked to Speakeasy about what is to come in the second part of the first season of the show, and also comments on the best elements of the first half of the season, including Camren Bicondova and David Mazouz’s acting skills:

Performances that helped convince the writers to play up certain characters more than planned:
The child actors, partcularly Camren Bicondova (Selina Kyle) and Mazouz, have also done well, in the writer-producer’s opinion. “With both of those two it’s just been a joy to see real, natural, great acting, and so we’ve used both of those guys more than we would have done otherwise.”

And there is more to come when “Gotham” comes back this Monday, with a brand new episode!

Camren Bicondova is back in her hometown for the end of the year, and she promoted “Gotham” while being interviewed by Fox 5 San Diego. You can watch her interview by clicking the image below, and check some pictures of Camren posted today on Twitter and Facebook to promote her interview! 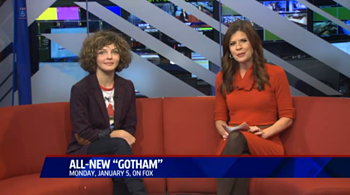 Merry Christmas to you all!

Here is the official synopsis of “Rogues’ Gallery”, thanks to Gotham Site:

DET. GORDON REPORTS TO DUTY AT ARKHAM ON AN ALL-NEW “GOTHAM” MONDAY, JANUARY 5, ON FOX

Det. Gordon’s assignment at Arkham Asylum gets off to a rocky start when the murder of a guard ignites an investigation, leading him to meet Dr. Leslie Thompkins (guest star Morena Baccarin, “Homeland”). Meanwhile, Cobblepot continues to build his army in the all new “Rogues’ Gallery” episode of GOTHAM airing Monday, Jan. 5 (8:00-9:00 PM ET/PT) on FOX. (GTH-111) (TV-14 L, S, V)

ComicBook.com released the first stills of the next episode of “Gotham”, “Rogues’ Gallery”, including one with Camren Bicondova as Selina “Cat” Kyle and Clare Foley as Ivy Pepper:

Edit: I replaced the still with a high quality version, thanks to Gotham Site.

Donal Logue, who plays detective Harvey Bullock in “Gotham”, spoke to Collider about his recent roles and his work on “Gotham”. He was asked about working with David Mazouz, whom he praises:

Collider: What’s it like to have David Mazouz, at the center of all of this?
LOGUE: He reminds us all of what we’re supposed to be doing, which is to pretend really hard that the stakes are the real stakes. He’s amazing. I love David. It’s great to see Sean [Pertwee] cut loose a little bit, too. We have a great group of people. Everybody in the cast is great.

The website is still under construction and will open soon. You can browse the gallery, which I am currently updating with promotional pictures, episode stills, screen captures and other things related to Bruce Wayne and Selina Kyle in “Gotham”.

The show is currently on hiatus and will be back on January 5, 2015 on Fox.