Camren Bicondova was on Instagram Live a few days ago (April 10, 2020) and took the time to answer some fan questions about “Gotham”. Watch below an edited video of her answers, including her talking a bit about her decision not to play the adult version of Selina Kyle in the series finale. 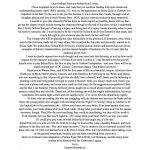