A new poster promoting “Gotham” season 4 at San Diego Comic-Con has just been unveiled by TVInsider, and you can find it in high resolution in the gallery: 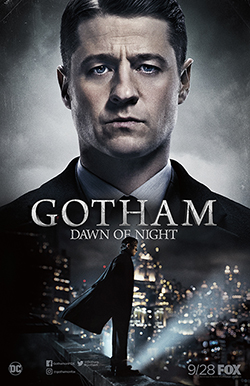 [TVInsider] It’s always the darkest knight before the dawn. And Gotham is serving up Batman goodness galore in the mini-poster being given out at San Diego Comic-Con this week.

The moody memento, which will be available at the Fox Booth #4229, sees Ben McKenzie’s Jim Gordon towering above the pre-vigilante Bruce Wayne (David Mazouz) as he watches over his beleaguered city, coattails flapping behind him like a cape. Between the two, we get the new “Dawn of Night” subtitle for Season 4, which implies so much about Bruce’s impending evolution into the Caped Crusader, as well as Gordon’s possible rise within the GCPD ranks.

And if you’re heading to Comic-Con, the show’s panel will be going down on Saturday, July 22, at 2:50pm in the Hilton Bayfront’s Indigo Ballroom, moderated by yours truly [Damian Holbrook]. After that, head over to the Fox Booth on the convention-center floor, where there will be star-studded autograph signings and other daily events, including the distribution of the exclusive 2017 FOX FANFARE poster tubes, other collectible mini-posters, giveaways and merch sales.

It is the second artwork revealed for season 4 so far, both using pictures from season 3. New promotional pictures of the cast should be available later, as a photoshoot took place earlier this month for the upcoming season.