The Hollywood Reporter posted a brand new poster for the third season of “Gotham” today! Click the picture below to see it in high quality in the gallery. 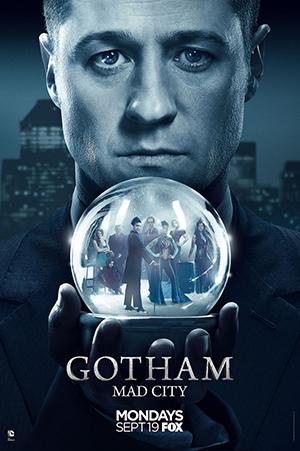 Jim Gordon (Ben McKenzie) is going to have his hands full when it comes to the villains wreaking havoc on his city this season on “Gotham”.

The Hollywood Reporter has the exclusive first look at the season-three key art for Fox’s DC Comics drama, and it features the erstwhile detective holding a crystal ball filled with all the nasty villains Gordon will be facing off against, including Penguin (Robin Lord Taylor), Fish Mooney (Jada Pinkett Smith) and Edward Nygma, aka the future Riddler (Cory Michael Smith), along with Selina Kyle (Camren Bicondova), Barbara Kean (Erin Richards), Tabitha Galavan (Jessica Lucas) and Butch (Drew Powell). The poster also features the newly recast, grown-up version of Poison Ivy (Maggie Geha), whose body change will be a major storyline this season.

Featuring the tagline “Mad City,” the tagline replaces the “Heroes Will Fall” campaign previously eyed for season three. It follows season two’s “Rise of the Villains” and “Wrath of the Villains.” At the end of season two, Hugo Strange (BD Wong) let all his human experiments, including Fish, Jerome (Cameron Monaghan) and a Bruce Wayne (David Mazouz) look-alike (also Mazouz), escape Indian Hill and flee to the streets of Gotham City. Gordon may have not rejoined the GCPD by the end of season two, deciding to instead find his ex Lee (Morena Baccarin) and repair their relationship. However, the amount of twisted, evil beings running amok in Gotham will most likely be the motivation Gordon needs to return to his job and help clean up his city.

“In season three you’re really going to see how villains have taken up residence inside the city,” executive producer John Stephens said. “The villains have become more and more a part of the fabric of the city of Gotham. It’s less and less a police show like it was in season one. It’s a natural continuation of that in season three.”

Many thanks to Thomas Calderone for the link!